#SFWApro
Last week I talked about using one’s own fears to craft scenes in which a character experiences great fear and either has to overcome it or succumb to it and fail to attain a goal as a result. I’d like to expand on that a bit further this week.

I’m a dog lover and have been all my life. Like any dog owner, I grieve the loss of a beloved pet. But there are three such losses that stand out in my mind and that have stayed vivid through the years so that I can recall the very strong emotions they aroused.

When I was a young child we had a black German shepherd named Spooksy. I adored that dog, and he adored me. He was my constant companion and my protector. 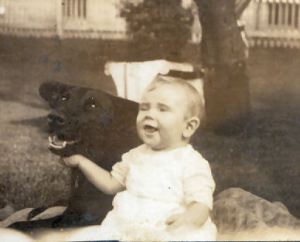 I couldn’t have been more than four years old when one evening as I was being sent to bed I heard my parents talking about getting rid of Spooksy. I was alarmed but could not believe that Spooksy would ever be taken from me. Nevertheless, when I got up the next morning, the memory of that overheard snatch of conversation was still with me, so when I came downstairs, the first thing I did was look for Spooksy, who was not allowed upstairs into the bedrooms. The first words out of my mouth were, “Where’s Spooksy?” I can’t remember the exact words my mother said, but the gist was that Spooksy was gone to live somewhere else with people who would give him a good home. I cried. I screamed. I threw tantrums. I refused to be consoled. My father suggested to my mother that perhaps they’d made a mistake, but my mother was adamant that Spooksy would not return. I wept and mourned for days. I still remember that terrible sense of loss and with it the feeling of helplessness. My mother would not yield. If my father could not persuade her, I certainly could not. I remember the anger that built up inside me both because of Spooksy having been taken from me and because of my utter inability to do anything to change the situation. I don’t think I ever fully trusted my mother after that. And I also blamed my father for not being strong enough to overrule her. It was an anger I carried with me from that time on.

About a year later my parents were separated and my mother and grandmother and I were moving to Florida, where my grandfather, who had just died, had left them a small house. On the way we stopped to visit my grandmother’s brother, who had a farm in Ohio. He had a dog that had recently had pups; they had been weaned, and my great-uncle gave me one. I named him Fluffy, and we took him with us to Florida. Unfortunately, the house we’d inherited was not vacant. My great aunt Melita, my grandfather’s sister, lived there and did not want to leave it. To her it was her house, and she set down the rules. One of her rules was No Dogs in the House. Fluffy was forced to stay outside.

We lived on a busy road, and Fluffy was hit by a car and killed. I blamed my aunt for not letting him come inside. Again, I felt helpless and angry. I was glad when Aunt Melita had to move out and find a home of her own. I think she went to live with a daughter and son-in-law, but I didn’t care where she went. I despised that woman and was relieved that I didn’t have to see her every day and abide by her rigid rules.

The third incident came eight years later and was the worst of all. Shortly after Fluffy’s untimely death and Aunt Melita’s departure, my mother got me another dog, a female shepherd mix we named Betsy. Betsy was my dog and my best friend as I went through my elementary school years and entered my teens.

Betsy and I get ready for Halloween

At that time there were no leash laws, and people let their dogs run loose. We had a small house, and the yard was not fenced in. Betsy had never been spayed. She was almost nine years old when she had her first and only litter of pups. She was a good mother, caring for the little ones and never going far from them. She’d go outside to “do her business” and come right back in to be with her pups. We heard there was a dog poisoner in the neighborhood, but we weren’t worried because Betsy never left our yard. I believe it was on a weekend, and I had gone out somewhere. My mother, who was unwell, grabbed the opportunity to go into her bedroom and take a nap. I came home and walked in to a horrible sight. Betsy was racing around the living room, yowling in pain, vomiting blood, and had lost control of her bowels and bladder. Somehow my mother had slept through the noise. I tried to catch Betsy, but she was so maddened by pain that I couldn’t restrain her. I became hysterical and screamed so long and so loud that the neighbors heard me and came over to see what was the matter. The neighbors, bless them, helped clean up the mess. My mother awoke and tried to help. We didn’t have a phone, and since I was too hysterical, Mother went to use a neighbor’s phone and call a veterinarian. Before she got back, Betsy collapsed and died. We learned later that the poison was ground glass mixed into raw hamburger meat and probably thrown into our yard. Her death was the worst thing I’ve ever witnessed. Again the grief I felt was long lasting and was accompanied by the feeling of helplessness and anger, this time toward the poisoner. We never found out who it was, and I so longed to know. I don’t know what I would have done, but I know what I wanted to do. I wanted to hurt that person the way Betsy had been hurt. I wanted that person to die the way Betsy had. But I was powerless to make that happen.

Now, what do these experiences have to do with writing? Although I’ve recounted them here, I would never include these scenes in a novel. However, the emotions they evoked are still vivid in my mind, and I have called upon those memories to describe emotional reactions my characters have had to very different events they confronted. I have used that feeling of helplessness that I experienced in scenes both with young people and with adults. It may be the death of a loved one. It may be something like being fired from a job, being evicted from an apartment. Something that the character is helpless to prevent. I know that feeling of helplessness and the anger that arises from it. I can make it convincing by conveying the feeling I’ve had, albeit in a totally different circumstance. If a character is a victim of an injustice and carries a resentment, I know what that feels like. The character may play out that resentment in a dangerous, even a lethal way. I never did that, but I wanted to. It’s a feeling I recall too well. Having just entered my teens when Betsy was poisoned, I had all the teenage angst and anger to deal with and no way of acting on it. Again, I can transfer that feeling to a child, teen-age, or adult character with a high degree of authenticity.

We’ve all had traumatic experiences of various sorts. Mine involved dogs. I’ve lost people I loved — family members and friends. Of course I grieved their deaths, but none affected me the way the loss of those dogs did. Your experiences would no doubt be very different, whether they caused grief, anger, feelings of helplessness, a desire for retribution, or something else entirely. If you write those experiences into your fiction as they actually happened, you can do so only once, but if in totally different circumstances you transfer to your characters the emotion they aroused, you can use them over and over. In doing so, you guarantee that your characters’ emotional reactions will be genuine, no matter how far-fetched or fantastic the events of your story.

I’ve dealt primarily with the emotions of grief and anger. Obviously there are many other experiences which produce very different emotions. I haven’t mentioned love, the strongest emotion of all. Wikipedia lists the emotions in a table that divides them into positive and negative emotions and categorizes them by types: related to object properties, future appraisal (hope and fear), event related, self appraisal, social, and cathected (love, hate). See http://en.wikipedia.org/wiki/Contrasting_and_categorization_of_emotions
This is just a sterile list, but I’m sure that my readers have experiences they can relate to some of these emotions. Have you ever used, not the experience itself, but the emotions it evokd to describe a character’s reaction? Take time to think about your own feelings and reactions to experiences that stand out to you.

Fellow writers, I’d love it if you’d share some of the ways in which you’ve put your own emotional reactions to work in your fiction.

5 Responses to Basing a Character’s Emotion on Personal Experience