#SFWApro
I came across two things in my recent reading that inspired this blog.

First, I have to explain that I am a long time reader of Asimov’s Science Fiction magazine. I read it from cover to cover. However that takes me some time, and I am now exactly one year behind in my reading. So recently I was reading Robert Silverberg’s Reflections column in the December 2012 Asimov’s. The subject is libraries, and as he spoke of libraries he visited in his childhood it brought back many memories. But that is not the thing that most caught my attention. It was a single sentence in which he said that by 1948 (when he would have been thirteen years old), “I had begun to write my own first pitiful little short stories.” It was that adjective, “pitiful,” that caught my attention. Robert Silverberg is one of the top science fiction writers of our time, and I can’t imagine anything he wrote being “pitiful.” But of course, he’s speaking from the vantage point of a much published author at age 77, and from that vantage point I’m sure those early writings did seem pitiful. And were we to read them now and compare them to his adult output, we might agree with that word choice. But I doubt that he would have used that adjective to describe them at the time he wrote them. I’d guess that he would have been proud of those first efforts, and rightly so, since no matter how pitiful they might seem to him now, they launched him on a path that led to a stellar career.

That reminds me that as adults we need to take care how we judge the early works of children. I discovered as an adult and already beginning to write, a file of stories my mother had kept and stored away. I had written them all in fourth grade when, for some reason, I spent a rather lot of time writing fantasy tales. They are written on wide-lined paper in heavy and now smudged pencil, and I could easily describe them as “pitiful,” probably with far more justification than Robert Silverberg had in describing his stories in that way.

I prefer to think of them as seedlings, needing to be nurtured and allowed to grow. I am exactly one year younger than Robert Silverberg—we share a birthday. But Silverberg never put aside his dream of writing. His seedlings grew and became sturdy plants, flowering into wonderful tales of science fiction and fantasy. I never put aside my dream, either, but the circumstances of my life caused it to languish for many years while my career choice took me in a different direction, and I began to write seriously rather late in life.

However, I am not writing about my experiences nor about Robert Silverberg’s, but about children being encouraged to write and to use their imagination. A child’s imagination, allowed to run wild, can be a wonderful thing. I’ve read a lot of children’s stories, many though certainly not all, with elements of fantasy. Now, I don’t know what elements may have characterized Robert Silverberg’s childhood writings, but I’d hazard a guess that they involved spaceships and aliens. However, my early writings, like many of the writings by children that I’ve been privileged to read, dealt with princes and princesses and fairies and magic and marvelous quests. And gems. Lots of lovely jewels adorning clothes and castles, with golden crowns and walls of gold studded with gems of every color and description.

And that brings me to Margaret Cavendish, Duchess of Newcastle-upon-Tyne, who lived from 1623 to December, 1673. Margaret Cavendish was a brilliant woman, a scholar of science and philosophy, and a writer of essays, plays, and novels, one of which is variously labeled as science fiction or as fantasy and is surely a forerunner of both. 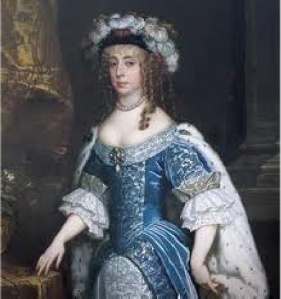 That novel is titled The Blazing World, and while it explores the scientific knowledge of her time and also delves deeply into philosophy and theology, its framework story bears all the characteristics I listed as being present in many early literary efforts of children. A woman from one world (not ours, as we eventually learn) goes on a quest that takes her to another world, called the blazing world at least in part because of the gold and gems that abound there. In it she encounters a weird variety of “men”—bear-men, bird-men, worm-men, fish-men, fly-men, magpie-men, parrot-men, ape-men, and more. She becomes the empress of this world, and engages in long discussions with the various types of “men” on scientific, philosophical, and metaphysical topics. She also summons spirits to question them on theological and philosophical matters. These long discourses are of historical interest, in that they reflect the best knowledge of her era, and are put forth by an educated and highly intelligent woman who dared to write under her own name.* The lengthy discourses would never be acceptable in a modern novel, and The Blazing World is not a novel one would read today for entertainment. It is a window into another time and valuable for that reason.

It is also a glimpse at the childhood of the fantasy novel. Just as modern children writing fantasy indulge in wild imaginings, Margaret Cavendish, an adult woman and a brilliant scholar, allowed her imagination to run rampant. Not reined in by any established canon, ignorant of today’s novelistic strictures, she constructed a world unfettered by precedent and based wholly on her inventive imagination. She even places herself in the story as a visitor in spirit to the blazing world, where she communes with the empress on the aforementioned topics and also on governmental policy.

Today’s readers might find Margaret Cavendish’s novel strange and unappealing because of its lengthy discourses that take precedence over plot development, but they would be judging from the vantage point of over three centuries of evolution in literary styles and tastes. It is as unfair to judge it in that way as it is to find a child’s first efforts at constructing a fantasy tale wanting. Her work is never childish, but it is childlike in that it exudes that type of unfettered sense of wonder that children pour into their stories with no restraint and no concern over exigencies of plot.

Let children explore what it means to construct a story. Encourage them to use imagination to fashion a world of their own making, and let it blaze with gold and gems. Value rather than criticize their literary output, regardless of its shortcomings as seen from an adult viewpoint. A child’s early efforts may seem pitiful, but if encouraged and praised for what they are and not all that they are not, they may well lead to a future of producing commercially viable novels and even literary masterpieces.

*To view other images and information on Cavendish, visit:
http://www.scribd.com/doc/152459896/Mulvihill