It’s out! The print version of Grandy’s Grand Inventions is available from Amazon now. The ebook will be available shortly. 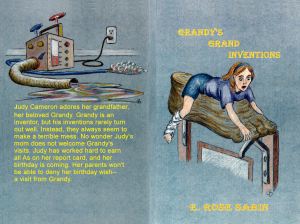 After I announced that I had written this children’s book, someone asked why, after writing novels for teens and adults, I had written a book for the early grades. The short answer to the question is that I had a story idea that fit that age group (six to ten years).

The longer answer is that I have learned at least mostly how to judge the proper length and audience a particular idea requires. This is not always an easy thing to figure out. As I’ve explained many times, many if not most of my ideas come from dreams. In this case, the dream was of a girl (age indeterminate) who for some reason was riding on a large wooden foot that was going up and down as if it were walking, though it wasn’t attached to anything. I liked the image but didn’t really know what to do with it. I had to ask myself a series of questions:
Who was the girl on the foot?
Why was she on it? How did she get there?
What force was propelling the foot?
What happened to her?
In considering these questions, I realized that the story had to be for younger children than I had previously written for. Why? Because a young child would fit better on a wooden foot and because the situation required a suspension of disbelief that would be more likely achieved by a younger child. It had a magical quality about it more appropriate to a children’s story than to a story for teens or adults.

And so gradually I developed the idea of a young girl whose grandfather was an inventor who came up with some crazy inventions, one of which was a levitator. It was the levitator that provided the force that lifted the foot. The foot went up and down as though walking because the grandfather had to follow it with the machine to keep it up in the air, but he couldn’t walk fast enough to keep up with it. Therefore, whenever he fell behind, the foot would descend and slow down. Then the grandfather would catch up and the foot would rise again and move faster.

As the story developed, it turned out to be about family relationships and friendship, not just about a runaway wooden foot.

That’s as much of the story as I’m going to tell here. I want to expound a bit on finding what length and what audience an idea fits. But that is a subject best left for my next blog. I want to conclude this one simply by saying that I wrote the children’s book because I had an idea that I wanted to develop, and a children’s book was the best form in which to develop it. I’ll leave it to young readers to decide how successful I was.

Please take a look at the book, and if you know a young reader who you think would like it, recommend it, or better yet, buy it for her. Click here to see the book on Amazon.