Not a Harry Potter Knockoff

My novel A School for Sorcery was published in hard cover in 2002 and came out in trade paperback as part of Tor’s Starscape series of fantasy and science fiction novels for teens in August 2003. Given those publication dates, it’s no wonder that many readers and some reviewers saw the book as having been written to appeal to fans of Harry Potter. In the Amazon reviews you’ll find these statements: “It is clearly inspired by Harry Potter,” “It seems that everyone is trying to out-Potter each other,” “This novel is a teenage Potter-like tale, “ It ends up retreading a lot of the same territory as the Harry Potter and “College of Magics” books,” and (I love this one!) “a thrilling novel about what happened if Harry Potter was female, a few years older, and in a completely different world.”

I can’t criticize readers for coming to these conclusions, given the publication dates of

the hard cover and paperback editions of the book. However, the truth is that I wrote A School for Sorcery well before the appearance of the Harry Potter books and also before the publication of A College of Magics, by Caroline Stevermer,  published in 1994. Whatever resemblance it may bear to the Harry Potter books, and, if any, to A College of Magics, is purely accidental. Unfortunately, A School for Sorcery languished in manuscript form until Tor bought the manuscript in 2000 for its newly launched Starscape line. There is no question that the YA line was launched by Tor in response to the popularity of the Harry Potter books, but that doesn’t mean that the books published in that line were written after Harry’s appearance on the scene.

In the case of my novel, I wrote it in 1991-92 for the specific purpose of submitting it to Andre Norton’s Gryphon Award competition for the best unpublished novel by a new woman fantasy writer. (This is not the same as the present day Andre Norton Award, which, according to Wikipedia, “is an annual award presented by the Science Fiction and Fantasy Writers of America [SFWA] to the author of the best young adult or middle grade science fiction or fantasy book published in the United States in the preceding year.” That award began in 2006 as a memorial to Andre Norton, who died in 2005.) The earlier award, sponsored by Andre Norton, offered, along with a monetary prize, a reading by an editor from a major publishing house. I won the award in 1992, and my manuscript did get readings not from just one but from at least three editors of major houses. 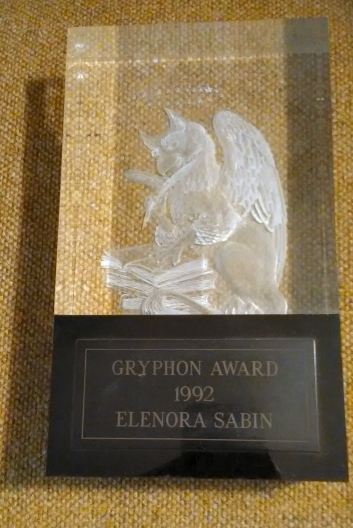 However, they all had the same reaction: they liked the work, but the manuscript was too long for a book for teens. At that time the thinking was that a novel for teens should be no longer than 60,000 words. That thinking changed as a result of the Harry Potter books; the major publishing houses added teen fantasy and science fiction lines, and my novel was bought by Tor.

A School for Sorcery did quite well. It earned out its advance, was named to the list of best books for teens in 2003 by the New York City Public Library system, and was translated into two European languages, Dutch and Romanian. I received many emails from fans, some of whom still keep in touch. Although the print editions are no longer available, the book is still available in electronic form for the Kindle and the Nook, and I’m still receiving royalties for it. It’s a book I’m still proud of, although I’m sure if I were writing it today, there are many things I’d write differently. But its message is still current.

Tria, the book’s protagonist, has always been a good daughter and a good student, obeying rules at home and at school. She’s excited to receive an invitation to attend a special school, the Leslie Simonton School for the Magically Gifted, glowingly described in the brochure accompanying the invitation. While her parents are aware that she has special abilities, they have forbidden her to use those abilities and she has obeyed. But when she shows her mother the invitation, her mother reveals that she too has special abilities, which she has stifled throughout her life. She does not want her daughter to be forced to do the same, so she persuades her husband to allow their daughter to attend if they can find the money for tuition. Tria’s father no doubt feels safe in making this concession, since he knows of no way they could come up with the amount of money required. However, he has been tricked. Tria’s mother has a hidden cache of money she has saved through the years and kept secret from her husband. Tria’s father grudgingly agrees to keep his word and let Tria go to the school, though he warns her that the invitation is almost certainly a scam.

Little notice is made in the book of the mother’s deception, but in a sense it underlies all that follows. When Tria arrives at the school, she is greatly disappointed to find it nothing resembling what the brochure had depicted. Tria’s initial interview with the headmistress is unsettling, and ensuing events convince Tria that her father was right—the school is a scam. But she resolves to stay rather than return home and admit that she and her mother have been played for fools. Thus she enters into the deception. But the school is not a fraud. Its dilapidated appearance is another deception. Even Headmistress’s stern demeanor and harsh treatment of Tria is a deception, intended to test Tria’s mettle.

This is a coming-of-age story, in which Tria must peel away the layers of deception and discover truth, if in fact truth is to be found. Along with learning to distinguish truth from falsehood, she must also learn when to follow rules, even ones that make no apparent sense, and when to rebel against authority and follow her own instincts. Does Tria ever succeed in peeling away all the layers of deception? Are the rules she breaks rules that should be broken, and how can she truly know, since the results aren’t always immediately apparent? The book’s conclusion does not definitively answer these questions, because these are questions that require a lifetime to answer fully, if they can be answered at all.

I tried to tell a good story, one that has plenty of action and intrigue and that anyone who is or has ever been a student in a school that is somewhat less than perfect (which is pretty much any school) can relate to. At the same time, the story offers the astute reader an exploration of existentialism and situational ethics. It’s a book that can be read on various levels, one that I hope will stimulate the imagination and also provide food for thought. Indeed, I am always delighted when a reader finds some bit of meaning that I never intentionally put there. It is often said that a writer cannot interpret his or her own work, and there is truth in that saying. A reader brings to a book his or her own personal experiences and interprets the book according to those experiences, which will of course differ from those of the author.

If you haven’t read A School for Sorcery, I hope you will, and will let me know what you find in it.

Find it at Barnes & Noble or at Amazon.com.

1 Response to Not a Harry Potter Knockoff